I had a great experience diving into the hotel and conference world, working for Glostrup Park Hotel. As an aspiring marketing assistant this was my first job in this business (a part from dabbling for my own little company).

I got to design a new menu, the hotel’s new keycard and several on- and offline advertisements, updated the website and made a newsletter.

All the different hotel departments had a huge need for photography so I made sure they got a lot of new image material for their archives and future use: browse through the gallery below.

Eager hands putting up election posters all over the country. It is the Alternative’s first local election and it’s all very exciting.

I spent a moment with the guy who takes care of the maintenance and cleaning of the areas of the building where I live. He agreed for me to make a photo reportage of him while doing his work.

Every day there are lots of people, invisible for many, who are cleaning the streets and discretely taking care of lots of little tasks to create order and make our lives more beautiful.

There are many ways to bring beauty.

It may not be the summer that many people are longing for but I find it so refreshing when there are shifts and changes in the weather. Not to mention the dramatic skies with big dark clouds that you can be lucky to have. I admit to be a fan of such weather, as I also love a good thunderstorm.
And of course, there will be days where our tasks in life are easier with sunshine and a clear blue sky, certainly.

But there is something about the changeable weather that also feels like things are moving and shifitng, or able to, not only in our surroundings but also inside ourselves.

An opportunity to bring that inspiration from nature into our life.

In the middle of the dark winter time I found myself longing for images, portraits, that would reflect the darkness and quality of this time.
I LOVE this time of year with its calm and opportunity to be more introvert and reflected. Where it is natural for us to rest more and we feel the longing to hibernate, just as the animals and plants do.

So it became a photo project.
As it revolves around the feminine and Mother Earth, I have been searching for women willing to take part in this, to embody the power of the feminine qualities and the darkness.

Being a winter project it wants to happen during the dark time. As we are fast approaching the Equinox and the light is regaining its power I will let go of the project for a while with the possibility to come back to it in November.
Interested in taking part? Write me an email: dotseverine@gmail.com

Keywords:
mother earth
primitive life force
raw power
stillness
natural
inside / introvert / interior
wisdom
life and death
destruction
birth
change
hold the potential
nurturing
balance
the darkness and all that it contains of life giving as well as life threatening/, the unknown, the unseen, all that we fear and that which plays a part in shaping and developing us
the light in the dark

Ramen, an originally Chinese noodle soup, was adopted by the Japanese and now a popular dish all over Japan with many regional and culinary variations.

Some years ago, in the city of Himeji I had this delicious bowl of pork miso ramen (buto miso ramen) before visiting the blossoming cherry trees evening spectacle by the city’s famous castle. I love the richness of the flavours and texture, the miso, the pork fat, the full-flavoured soup that all the other ingredients are soaking in.

The miso ramen type originates from Hokkaido, the northen part of Japan, and I can imagine the bliss of such a bowl of hot delight on a cold winter day.

Ramen-no-Horyu, this Himeji ramen restaurant, was of the classic, simple and slightly greasy kind, which I guess underlines its authenticity and tastyness of dishes. I had the place almost to myself this evening and loved it.

The pork pieces are wonderfully tasty and rich.

Every year in the autumn I get so happy and in awe about the bright colours of the foliage, the leaves of the trees turning yellow, orange, red, burgundy, red-brown before falling to the ground.

This year I gathered the brightest leaves that I came across, from different maples, red oak and lime trees. Making them into a lamp shade brings back the luminosity that I so much adore when I turn on the light in my living room.
Oh colour!

The Medicine Wheel is a core element in Native American traditions.

One of the most simple Medicine Wheels is based on the Four Directions: East, West, South and North. These are connected to the Four Elements: Fire, Earth, Water and Air; the building blocks of Life and expressions of universal energies.
They can also represent many other things according to the specific tradition.

It is a sacred and ceremonial space to be honored and cared for.

Here are some different examples of Medicine Wheels.
Often they are built on the land of a circle of stones and with a fire pit in the center. They can take many other shapes however, in the form of an altar, of a work of art or a round calendar. 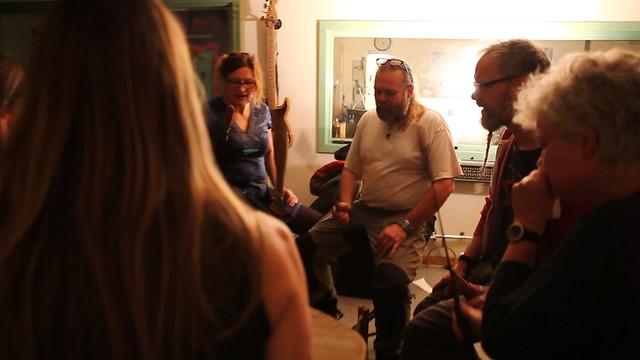 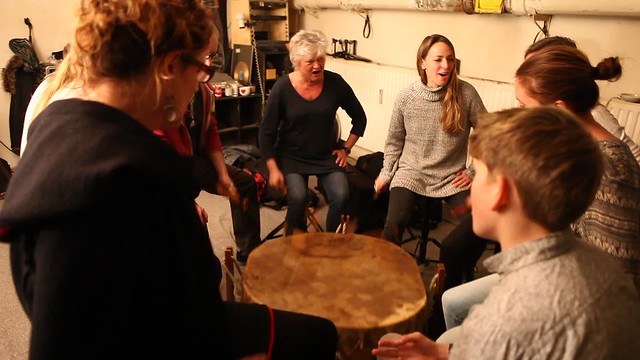 Coming together in the name of life, light and love.
What an invigorating way to spend an November afternoon!